Kankouran goes to the WHITE HOUSE!!!! 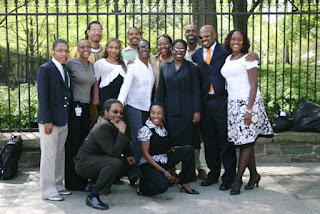 I remember last week when I checked the Kankouran email box and there was an email from the White House Chief of Staff. She wanted someone to contact her about getting her some information on the company. Like anything else of importance, I sent the email on to Ali, Kankouran’s Program Manager, the glue that keeps us all together. That night, I went to Community Class and Assane (Konte) mentioned that someone from the White House called him about doing a number or two at an event at the White House. After the email and even speaking to Assane, I didn’t even really think about getting the opportunity to dance at the White House. I don’t know, I guess with everything else I do with my life it just didn’t sink in.

That was until last Thursday came and Assane brought us all together to tell us we would be performing for the President of the United States and his Wife as they played host and hostess to some 200+ dignitaries from the African continent in what the White House dubbed Malaria Awareness Day. Konte told us that the company would be doing a Drum call followed by two numbers for the crowd. We gave our names and social security numbers and then it was off the rehearsal.

The performance was TODAY (Wednesday, April 25th, 2007). I left work on PTO, and took a cab over the White House. It was hard not telling anyone at work what I was doing, but since I just started a new job, I thought it would be best not to let them know about my other dealings outside of the work place. This required a certain amount of secrecy, but I make no apologies for it and I’m still cool with it even as I enter in this entry to my blog. 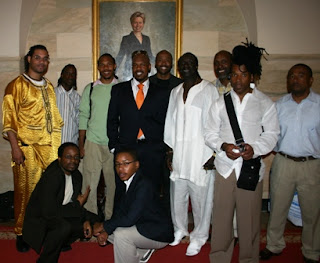 Riding up to the White House in the cab, I was starting to feel a certain level of nervous excitement take over in the gut of my stomach. Even though I’ve been apart of the Kankouran West African Dance Company for over five years now, I could honestly admit that today, I was a bit nervous!!! I met up with the rest of the crew at the NE gate of the White House. Security took FOREVER, but once we got through, I felt like such a blasted tourist!!! Walking through the halls, you could feel the grandeur of the place. A thousand different thoughts were running through my head all at once!! I will be the first to say that I do NOT agree with nearly ANY of The Presidents policies, including the debacle in Iraq. I will even go on record as saying that this President’s “Lone Ranger-Face-The-World-Alone” tactics have made me ashamed to even mention to people that I’m an American (which makes my American/Trinidadian dual heritage even more of a benefit). And let’s not EVEN TALK about how he plans to VETO the bill, which would give DC, voting rights in Congress (ergo Taxation WITHOUT Representation)!!!! Needless, to say, all of this aside, by the time we were all dressed and ready to perform, I was a nervous ball of energy, ready to show the masses what the spirit of Kankouran is all about!! 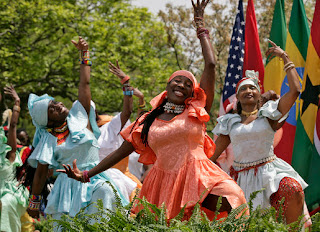 We waited in a separate area while the President gave his speech to the ambassadors in the audience. We were told that when Mrs. Bush introduced us, that’s when we come in. She did exactly that (She kind of jacked our name up a little bit, but that’s cool. Most people do), and then Dame Gueye began the Drum Call!! At that point all eyes were on us as we made our way to the stage. As Dame and the rest of the drummers finished the drum call, the Kankouran Women came on stage with a level of finesse and grace that I truly appreciate and even look up to in them. By far, they are some of the strongest black women I know, doing their thing each and every performance and this one was no different. As the women left the stage, it was time for the Men of Kankouran to just DO THE DAMNED THING!!! I said a silent prayer to my ancestors and it was off to the stage!!! As I was dancing, I looked at the President and to my surprise; he was straight jamming throughout the whole performance!!! It was like he wanted to jump out of his chair and get on stage with us and throw down!! We didn’t even get that type of reaction from the Ambassador of Senegal!!!

As a company, we knew that this was a special moment in time, devoid of political views and opinions. Our company Director, Assane Konte told the Event Planner that his only request was that we would get a picture with the President, and sure enough, once we were done, we did!! The president jumped up out of his chair, with his wife by his side and came to take some pictures for the press. It was a great opportunity for us as individuals and an even greater opportunity for our Company Director, whose only wish is to bring the culture to the people, regardless of race, class, color or creed. 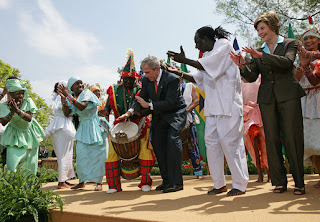 After the photo op, Assane did something that only HE could do!! Where it any other man, I don’t think it would’ve been possible!!! He grabbed the hands of George and Laura Bush and said “Uh-Uh! It’s not over! You not gonna come on this stage without dancing with us!!” I looked at him like “Holy Spit!! The Secret Service’s about to kick our butts to Dakar for that one!” At that moment, it was clear that Madame President Laura Bush was kind of put on the spot (I can only imagine the pressure for what seems like a very shy and quiet individual), however George Bush was ready to ROCK!! We did a little number with them on stage and President Bush was feeling it some much, he tried to drum a few notes on Dame Gueye’s Drum!!!!!! My mouth dropped to the floor when I saw that one!!!

After that, the good time was over and the President shook our hands, thanking us for the show and telling us how he really appreciated us performing at the event!! We greeted the Ambassador of Senegal as we left stage and he was very proud that his country and his culture were well represented on one of the biggest stages that one could think possible!!! As we were going back in, I forgot my sandals outside and ran to get them. I ran into Laura Bush and she shook my hand, thanking me again for coming and that she really enjoyed the show!!! I gave my business card to the event organizer, hoping that we could get some copies of the pictures taken. Unfortunately, it’s going to take about a MONTH to get them. Let us hope that such a great event doesn’t get screened too hard buy the Public Relations Sector of the White House. I’m truly kicking myself for not finding a photographer to take the pictures, however, with the schedule we had to put everything together for the event, it was next to impossible to pull that together in such a short span of time, with everything else I do within a day. 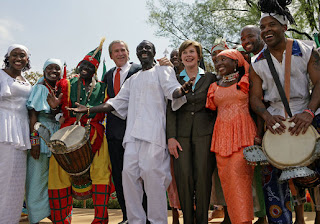 In the end, I can honestly say that I am very grateful for the opportunity to be on such a grand stage. Have my views changed about the policy driven by that place? HECK NO!!! But in the end, looking at my life and what I’ve experienced, when I’m retired and telling stories to my children’s children, I can tell them about the day that their grandfather met the President of the United States!!!! I know that very few can say that, however I am humble enough to know when there’s a moment in time to appreciate, value and just live in the moment. This was one of those moments and on this day as I type this entry into my blog; I’m going to enjoy every single minute of it!!!!!!!