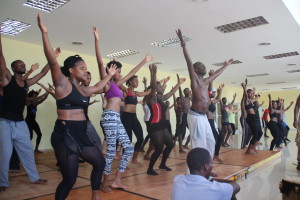 So I’ve been back from Haiti for about four days now. The friendships and connections that I made at the first annual VIN PRAN BAGET dance retreat were AMAZING!! Last year, on my sojourn to Haiti with the Haitian Folkloric dance troupe Rara Tou Limen, I was introduced to a dancer and choreographer, Mr. Dieufel Lamisere. Dieufel (aka Ferlo) is a dancer with international acclaim for his work done in both Haiti, and here in the United States. The passion he has for dance and teaching dance can be deeply felt within every line across the dance floor. We had the opportunity to travel to the city of Jacmel, the home of Ferlo and his organization, Dance To Save Lives. Dance To Save Lives (DTSL) provides orphans and homeless teenagers the necessary resources to learn what it means to be a professional performing artist. DTSL trains these teens in Haitian folkloric and modern dance forms. Last year I was able to see some of these young people dance, and I was VERY impressed! 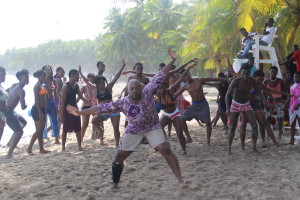 West African Dance Workshop on the Beach in Jacmel

I found out earlier this year that Ferlo was planning a dance retreat in Haiti. I knew that there was going to be a focus on Haitian dance forms, but I also wondered if there was room for some classes in West African Dance at the retreat. After speaking with Ferlo, we both found that including West African Dance classes was a natural connection that actually made a LOT of sense. It paved a way for Africans within the Diaspora to connect, learn, and grow, while working together towards a common goal. So after the performance of my inaugural choreography with Kofago Dance Ensemble, I was on a plane bound for Haiti. I was accompanied by my brother Yuma Bellomee (aka Docta Yew) and my teacher Medoune Yacine Gueye (aka Papa Dame), so I knew that the music was going to be nice!

We arrived in Haiti on July 3rd. Ferlo met us at the Airport, along with some of his other guest, who were arriving from Montreal, Canada. After a Two hour ride through the mountains, we arrived in Jacmel. We met up with the DTSL teens and we were all ready to dance!

I taught my first class on July 4th. I taught Doudoumba because of the synergy between the warrior energy of the doudoumba and the Haitian dance Nago. The 2 dance styles share a lot of similarities in movement, rhythms and music! My next class was the next day at the beach. I ended up doing a combination of Bara, Mandiani, Wango, Madaccadon for class to provide a preview of what we would be covering in the days to come. This was also my first time teaching/dancing in sand, which was an experience in itself! 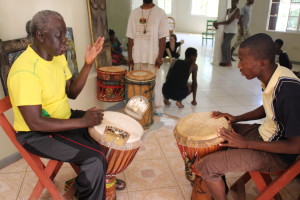 Day One of the retreat was Monday. My class was between two Master Haitian dancers, Lyons and Ferlo. Lyons, a student under the lineage of Viviane Gauthier, taught the first class of the day. My class was right after his. I ended up teaching Donba/Mandiani because of the amount of young people in attendance brought a heavy energy of rites of passage and initiation to my mind.

Each day after day one brought a deeper understanding of Haitian folkloric dance and culture. Although I’ve worked on various projects in Haiti over the past five years, this was the first one that allowed me to connect with artists and educators like myself. Each artist was committed to the work necessary to properly promote the cultures of the African Diaspora in the most authentic and positive way possible.