A New Foundation – Standing Alone to Define The Concept of Community

Over the past five years, I realized that I have not been honest about what I have truly wanted in life. I’ve spent 15 years in the DC metropolitan area working under the guise of community empowerment and support, only to realize that what I considered to be community, verses what the next individual considered, were completely separate concepts. This often led me into some rather confusing situations where I associated with people whose interactions in my life where extremely self-serving. I felt drastically burned out, after years of being dedicated to one cause and one vision.

At the beginning of 2014, I made a commitment to myself to honor my individuality. For too long I have lived under the notion that I needed to put my community before my own needs and beliefs. I always tried to be there for other people, and in the process I forgot to take care of myself. So, 2014 was definitely about moving forward in a way that honored the person I am, as well as the person who I am striving to be. This meant getting back on the dance floor! At one time in my life, I danced five out of seven days a week. Dance gave me LIFE! Then everything changed with the death of my brother Ruskin in 2010. I completely stopped dancing and lost connection with my true purpose. However, his death started me on a wild ride of growth and self-actualization that pushed me to worked harder, and become the best person I can be.

Aside from the death of my brother, I stopped dancing because dance became a political tool for people who had their own individual agendas with no regard to dance or community. Dance in itself is the ultimate manifestation of spirit. Your body moves and contorts itself in a way that can defy physics, allowing for a release of energy that can only be seen through bodily movement within the minutes or seconds of space. Dance is an expression that can be very personal. When dancing as a part of a collective, it is imperative that you understand the intention of the collective, as you share your spirit. This is why there are so many different spaces for dance in the DC metropolitan area. Each space has it’s own spirit of movement and rhythm that should be celebrated and supported by those who feel that their energy is aligned with what’s going on at that space.

Dance can also be used to heal people in so many different ways. When I started teaching adult classes again in 2014, the major focus behind my classes was about healing. I needed to heal from my own ordeals and personal struggles. What I didn’t realize was that in taking this stand to represent the healing aspects of rhythm and dance, I became the very thing that I had an issue with regarding other peoples actions: a political tool with my own agenda. Making this realization reminded me of when I voted for the first time. I knew what I wanted to do had to be done; I just didn’t like the road I had to travel to get there. If dancing was going to be my tool and/or my “weapon” of choice, I had to make sure that my reasoning for doing so would not be seen or viewed as a “hustle” or as something being done with the wrong intentions. 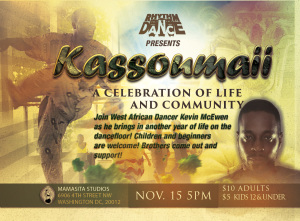 With November being the month of my birth, I wanted to focus on the spirit of celebration so I created the class “Kassoumaii,” a Jola word meaning to “come together.” Sabar has ALWAYS been my favorite dance, however the classes that we have in DC were far and few in-between. This lead to the creation of the “Just the Basics” dance series, which has been an amazing success! These classes are an extension of who I am as a man and as a dancer. As a man, my work, my passion and my dance foundation IS my community! These classes are my offering to my community in a way that is in alignment with what community really means to me. What I do is not a hustle, nor is it something that can be taken for granted. This movement is supported by my elders, my ancestors and my community, which leaves me wanting to take my game up to an even higher level so that I can give the people what they want!

See you on the dance floor!